Arsha Vidya Gurukulam along with Rotary Club of Coimbatore Ikons conducted  a  residential Summer Camp for Children in the name JYOTIRGAMAYA from May 1, 2016 to May 8, 2016. This programme was conducted under the aegis  of  Rotary Youth Leadership Awards 2016. 67 students and 6 Teachers from 6 different states of India participated in the summer camp.

The camp was inaugurated on May 1, 2016.  Dr. Savitri Ramaiah was the master of ceremony who welcomed the gathering. The meeting begun with prayer by Children and by lighting of lamp by Swami Sadatmananda and Smt. Sunitha Santha 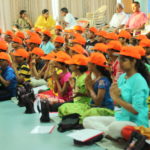 Swami Sankarananda gave details of the facilities available at the Gurukulam. Rtn P. Thirumurthy, President, Rotary Club of Coimbatore Ikons spoke about his teenage days,  where he spent in the village during summer holidays along with cousins and how they were connected with nature and how they developed bonds with relatives.

The children were divided into two group- Seniors and Juniors. A few programmes were held separate for the two  groups and a few were held combined for both the groups.

On the final day May 8, 2016 there was a colourful valedictory programme where students displayed the skills they learnt. After
prayers by children, Rtn Ramesh Kumar addressed on behalf of the Rotary. He expressed the happiness of Rotary to join AVG in this cultural education programme. Swami Sadatmananda gave the benedictory address. He said the message of the camp was to have love for knowledge, to have readiness to make effort and appreciate Isvara’s grace for what has been received. Swami Sankarananda appreciated the enthusiasm of the children throughout the day for the entire week. Selected photos of the summer camp were shown. Swami Sadatmananda honoured the Project Directors Smt & Sri S. N. Ramachandran and Smt & Sri Pulluri Srinivas. The programe concluded with vote of thanks by Smt. Lalitha Ramachandran.

The children cherished bonding with each other, coming from different parts of the country. They enjoyed the activities and the atmosphere and expressed their intention to come back for future summer camps. The children learnt a lot about Indian culture. 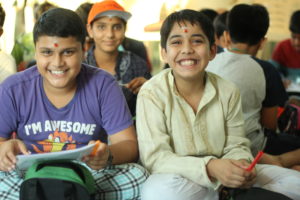