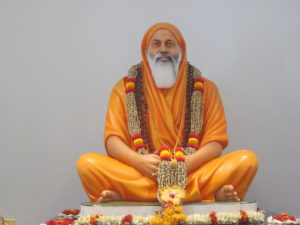 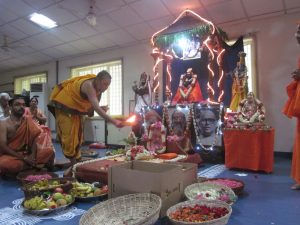 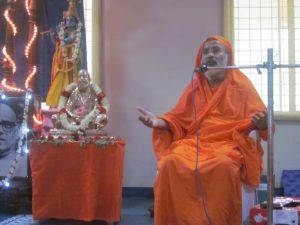 On 16th July 2019, Guru Purnima was celebrated with devotional fervour at Arsha Vidya Gurukulam, Anaikatti.  This day which also marks the birthday of Vyasacharya, who forms an important link in the teaching tradition is remembered along with other acharyas in the tradition.

The program started at 10:30 AM with the anujna of Pujya Swamiji at Guru Tirtha. In the lecture hall named “Kashi”, of the Gurukulam, where all the photos and murtis of the acharyas of the tradition starting from Sri Vyasacharya, Swami Chinmayananda, Swami Pranavananda and Swami Tarananda Giri along with the photo of Pujya Swamiji with his padukas beautifully decorated were kept for puja. A bronze statue of Pujya Swamiji ornamented with flowers decorated the altar.

The priests of the Gurukulam temple did the puja with the supervision of Swamini Saradananda and Swamini Vedarthananda. An elaborate puja started with the invocation of Mahaganapathi followed by shodashopachara puja to the Guru Padukas. Guru Stotrams and Dayananda Panchakam were chanted.

After the puja, Swami Sadatmananda gave anugraha bhasanam. The following is the short excerpt of the talks of Swamiji.

This day is called Vyasa Purnima as this day happens to be the birthday of Veda Vyasa, who compiled the Vedas which were scattered and preserved by different families. He wrote Mahabharata, 18 puranas, smriti grantas like Vyasasmrti, Brahmasutra, Bhashyam on Yogasutra etc. In our tradition, Veda Vyasa is looked upon as the incarnation of Lord Vishnu and to express our gratitude to Vyasa, this day is celebrated as Vyasa Purnima.

This day is also celebrated as Guru Purnima day in our tradition to express gratitude to our gurus and through our guru, to the entire guru parampara.

One more significance of this day, according to the tradition, is that parivrajaka sadhus will continue stay in one place for the next four months/fortnights as rainy season starting from this month would make the travel very difficult, and thereby they avoid causing harm to the tiny insects which come out from the earth due to heavy rain.

Another significance of this day is that some take vrata either in the form of abstaining from something or doing something positive.

All the devotees, campers of the ongoing camp conducted by Swami Sadatmananda, trustees of the Gurukulam, Sannyasi disciples of Pujya Swamiji, other sannyasis and brahmacharis participated in the Guru puja. At the end of puja, all offered flowers to the paduka, and received prasada and blessings from Swami Sadatmananda Saraswati. The puja concluded with the distribution of mahaprasada and sumptuous bhiksa in the dining hall to all the people. All the devotees thanked the day and the Gurukulam for the excellent opportunity of expressing their gratitude to the entire guru parampara.