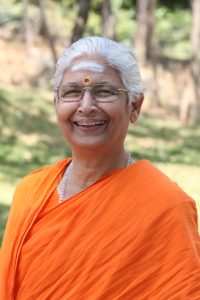 Swamini Brahmaleenananda is a disciple of Pujya Sri Swami Dayananda Saraswati. She met Pujya Swamiji in 1967, when she was doing her postgraduation in Obstetrics and Gynaecology. After completing her studies, she worked in various medical colleges and also attended whenever possible the Public talks of Pujya Swamiji and the classes of Swami Paramarthanandaji. In December 1990, she joined the first 3½ year residential course in Vedanta and Sanskrit at Anaikkatti, Coimbatore. After completion of the course, for a short period she taught in Rishikesh and also helped in the Gurukulam.

In October 1995, she moved to Salem, established the Arsha Vidya Prakasika Centre and has been teaching there since then till today. She has translated the Gita Home Study and other books of Pujya Swamiji into Tamil. She has also helped in editing various other books like the Visnu Sahasranama and the GHS in book form. She was initiated into Sannyasa in 1999.

From November 2005, she has been teaching in Coimbatore also. Between 2005 and 2010, she has conducted some camps and also assisted Pujya Swamiji in some camps at the Gurukulam and moved to Coimbatore in 2009. Under the outreach program of the Gurukulam, Swamini  teaches in the City and in a Senior citizen home. She teaches both in English and Tamil. In these 20 years, she has taught a few rounds of the entire Bhagavad Gita and also some Upanisads, Prakarana Granthas and also Sanskrit. She continues to do classes in Salem and also goes now and then to talk to the students at Manjakkudi, the birth place of Pujya Swamiji.