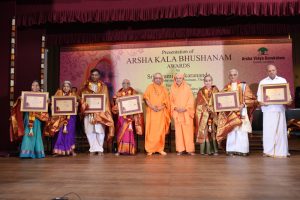 Pavithra Srinivasan eloquently conducted the events as the master of ceremony.

Swami Omkarananda presented the awardees with a citation, a purse of Rs. one lac and a silk shawl. They were conferred the title Arsha Kala Bhushanam.

The citation read as follows:

mini for her admirable contribution to Carnatic music as a violin maestro creating a generation of performers and teachers and preserving tradition.

g out the sophistication & importance of rhythm in music, pioneering the sruti-laya percussion ensemble, conforming to tradition and for being an inspiring guru.

veli R. Santhanagopalan for his admirable contribution to Carnatic music through critically acclaimed performances and nourishing the classical musical tradition as an accomplished performer, an erudite scholar, an innovative educator and an inspiring Guru.

Smt. Shanta Dhananjayan and Sri. V.P. Dhananjayan for their unique contribution in the field of classical Bharatanatyam, for creating a generation of artists, both in India and the U.S.A., each carrying the proud seal of the Dhananjayans abhinaya.

The awardees thanked Pujya Swamiji for selecting them for this award and honouring them. They said they missed receiving the award from the hands of Pujya Swamiji himself. 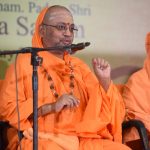 SWAMI OMKARANANANDA’S ANUGRAHA BHASHANAM: Swami Omkarananda said that Pujya Swamiji is worship-worthy and hence to be remembered in the early morning.  He quoted Bharatiyar’s song where it is mentioned that Goddess Saraswati resides in many places including music and dance. He told that in Thiruvidaimarudur temple, there are many sculptures which depict various dance postures. In traditional temples, music is offered as one of the steps in the deity worship. Like yagna, music and dance also result in punya. Although Pujya Swamiji was a traditional teacher of Vedanta, due to his broad outlook, promoted fine arts. Although Pujya Swamiji is out of sight, he continues to reside in our hearts.

Swamiji blessed the awardees and all those present.

It was not just the usual carnatic music concert. The artist with her emotive energy and devotional fervor transported the audience to a divine world. She kept the audience spell bound by her multi lingual kritis and majority of the crowd did not leave although it was very late in the evening. The concert ended with AIM for Seva motto song.

Swami Shankarananda proposed the vote of thanks.