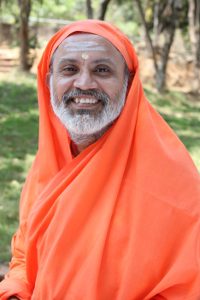 Swamiji was born in 1962 in Gujarat state. His spiritual pursuit started at a young age which finally led him to Vedanta. After completing his education in engineering, he joined a three year course at Baroda in 1986 under Swami Brahmatmananda, a student of Pujya Swami Dayananda Saraswati. He got his brahmacarya-diksha in 1989 and later continued his studies with Swami Visharadanandaji at Swami Dayananda Ashram at Rishikesh. During this period, he was privileged to study under Pujya Swamiji.

He was initiated into sannyasa in 1997 by Pujya Swami and given the name Swami Sadatmananda.

Swamiji was the acarya at Arsha Vidya Kendra, Bangalore from 1994 to April 2014. The center was later registered as Arsha Vidya Kendra Trust with Pujya Swamiji as the paramount trustee and Swamiji as the chairman. He conducted classes at the Kendra on Upanishads, Brahmasutra, BhagavadgIta, Puranas, Sanskrit and other vedantic texts. He also conducted weekly classes for children and young adults.

He initiated and motivated various social activities by the Kendra. The Kendra grew considerably during his tenure of 20 years and a lot of people were benefited from his teaching. His love for studying the sastra and understanding it in-depth, is a quality that all his students value and strive to imbibe.

During 2011 to 2013, under invitation from the Mahamandaleswar of Kailash Ashram, Rishikesh, he annually visited Rishikesh and taught Upanishad and other vedantic texts there, in Hindi with Bhashyam and Tika.

In 2013, Pujya Swamiji suggested that he conduct the next course at Coimbatore. Accordingly, in May 2014, under the guidance of Pujya Swamiji, a three month and a three year residential course in Vedanta and Sanskrit was started at Arsha Vidya Gurukulam, Anaikatti, Coimbatore with Swamiji as the Chief Acarya. Swamiji conducted daily classes in Upanishads, Bhagavad Gita and other Vedantic texts during the course which was concluded in September 2017.

Swamiji is a very versatile teacher who can reach out to a wide variety of audience both young and old. He is well-versed in Sanskrit and applies it in the study of Bhashyam. He is committed to convey the message of the sastra to his students with depth and clarity. His teaching style is simple, clear with a lot of examples. He can teach with ease in English, his native Gujarati, or in Hindi. He is warm, accessible and ready to help. Swamiji is disciplined and committed to follow the spirit of sannyasa. He is very caring of the students and is a great inspiration to them in living a life in keeping with sastra.

After the completion of the long term course, he is conducting short term retreats for the participants, and also daily classes for the ashramites. Swamiji will be conducting a 108 day Residential Vedanta Course in September 2019 which will be followed by another course spanning over 18 months.