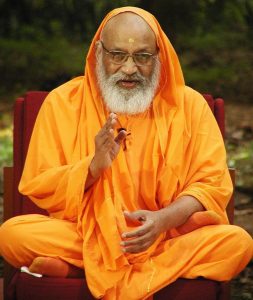 Pujya Sri Swami Dayananda Saraswati was a distinguished, traditional teacher of Vedanta. His depth of understanding and nuanced appreciation of both Eastern and Western cultures made him that rare teacher who could communicate the vision of non-duality to modern listeners. He was able to make one see, with immediacy, the truth of oneself as the whole.

An eminent teacher of Vedanta and an erudite scholar in Sanskrit, Swamiji was well known for his excellent communication skills. Swamiji taught Vedanta in India for more than five decades, and around the world from 1976. In his public talks abroad, Swamiji spoke at many prestigious forums, and addressed international conventions, UNESCO and the United Nations, where he participated in the Millennium Peace Summit.

A teacher of teachers, Swamiji designed and taught six in-depth Vedanta courses, each spanning 30 to 36 months and eight more have been conducted with his guidance. The graduates from these courses are now acharyas, teaching around the world. More than two hundred are sannyasis and are highly respected as scholars and teachers throughout India and abroad. Some of these Swamis and Swaminis have conducted their own long-term residential courses under his guidance and with his assistance. The Ashrams founded by Swamiji in India are the Arsha Vidya Pitham in Rishikesh, the Arsha Vidya Gurukulam at Annaikatti, Coimbatore and the Arsha Vijnana Gurukulam at Nagpur. In the U.S., Swamiji founded the Arsha Vidya Gurukulam at Saylorsburg, Pennsylvania. Regular teaching programs in Vedanta, Sanskrit, yoga etc. are being conducted at these institutions. In addition, his students have set up many teaching centers in India and abroad that carry on the tradition of Vedantic teaching.

After teaching Vedanta for over four decades, Swamiji anticipating an erosion of dharma started various initiatives. In order to protect dharma, the person living a life of dharma, the dharmi, who is integral for protecting sanatana dharma needed to be protected. With this vision, Swamiji started the Dharma Rakshana Samiti in 1999, which spreads awareness of the richness of Vedic culture.

In 2000, Swamiji convened the Hindu Dharma Acharya Sabha, an apex body consisting of all the prominent acharyas of various sampradayas of Hinduism to address the need for an official unified voice to represent Sanatanana dharma as a whole. The Sabha actively engages in preserving what is sacred for a Hindu by giving a strong voice to various causes like the Tirupati declaration, Ram Sethu and Tehri dam. The Acharya Sabha also engages with other religions of the world in an effort to promote peace and unity among religions. Swamiji convened two Hindu-Buddhist and Hindu-Jewish dialogues which were instrumental in promoting inter-faith understanding and creating mutual respect among the religions.

Swamiji also initiated and supported various humanitarian efforts for the last forty-five years. A significant one among these is the establishment of All India Movement for Seva in 2000. Awarded consultative status with ECOSOC (Economic and Social Council) by the United Nations in 2005, this organization is devoted to serving people in the remote areas of India, mainly in the field of Education and Health Care. It as an integrated community development program that reaches out to the tribal and rural people living in remote parts of the country, bringing them educational, nutritional, medical and infrastructural assistance. AIM for Seva runs over 120 free student homes for needy students spread all over the country.

In November 2001, Swamiji convened the first World Congress for the Preservation of Religious Diversity in Delhi, inaugurated by the Dalai Lama and the then Prime Minister Sri A.B. Vajpayee. An important outcome of the Congress was the formation of a Global Commission for the Preservation of Religious Diversity, spearheaded by Swamiji. Swamiji was also active in forming and participating in the Women’s Global Peace Initiative, which was convened at the United Nations in Geneva in October 2002.

Swamiji promoted several international events and participated as a speaker in many global forums, among which are: the United Nations gathering of NGOs, the UNESCO Seoul Global Convention, the United Nations 50th Anniversary Celebration, the Millennium World Peace Summit, the International Congress for the Preservation of Religious Diversity, the Conference on the Preservation of Sacred Sites, the World Council for Preservation of Religious Diversity, the Youth Peace Summit, the Global Peace Initiative of Women Religious and Spiritual Leaders, a Hindu-Christian dialogue with the World Council of Churches, and the Hindu-Jewish Leadership Summit.

In 2006, Swamiji initiated a renewal of the Thirumurai tradition at Siva temples. Through this project, the Oduvars who are the traditional singers of Thirumurai are encouraged and honoured with citation and cash reward.

In 2008, Swamiji represented Hinduism at the International Inter religious Conference at The Netherlands to participate and sign the Faith in Human Rights Statement, a historic document that vouchsafes human rights and fundamental freedom endorsed by the religious leaders of the world. 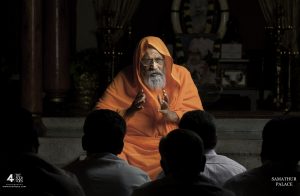 Some of the other major initiatives started by Pujya Swamiji include:

Swamiji attained Mahasamadhi at Rishikesh by the banks of the Ganga on 23rd September 2015.

Pujya Sri Swami Dayananda Saraswati was awarded the Padma Bhushan posthumously for his exemplary service to the nation in the field of spiritualism on Jan 25, 2016.