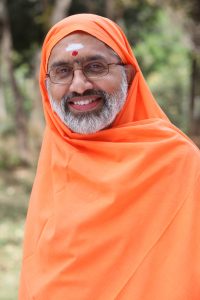 Swami Shankarananda is a disciple of Pujya Sri Swami Dayananda Saraswati. He had the privilege of studying with Pujya Swamiji and all his disciples who taught at the Arsha Vidya Gurukulam at Saylorsburg including Swami Viditatmananda, Swami Tadatmananda, Swami Pratyagbodhananda and Swami Tattvavidananda for many years.

He took to a fulltime study in 2004 and attended a three year course in Vedanta and Sanskrit at the Arsha Vijnana Gurukulam in Nagpur taught by Pujya Swamiji and Swamini Brahmaprakasananda. After completion of the course, he went back to Saylorsburg and from the summer of 2008 till 2010, he assisted with children’s classes and taught Sanskrit based on Paninian grammar.

He assisted with the long term Vedanta course taught by Pujya Swamiji and Swami Saksatkrtananda between April 2010 and August 2013 at Arsha Vidya Gurukulam, Anaikatti, Coimbatore. He taught Sanskrit and conducted several Satsangs during this course.

Swamiji is presently an acarya in the ongoing long-term course at the Gurukulam. He teaches Sanskrit, Vedanta, conducts guided meditations and Satsangs.

Swamiji is an excellent teacher of both Vedanta and Paninian grammar. The teaching shines through his unique intense and captivating style which awakens and inspires one to enquire further, dispelling false notions and enabling clear thinking leading to the discovery of the one’s own reality. Being well-versed in Sanskrit, he brings out the depth and beauty of the meaning conveyed in the sastra, keeping in view the nuances of grammar.

Swamiji is a caring teacher, committed to the well-being of the students, going all the way to ensure the comfort of the student in all ways.

He has an undergraduate degree in Engineering and Masters in Business and worked in the financial services industry for many years prior to taking to a fulltime study of sastras.