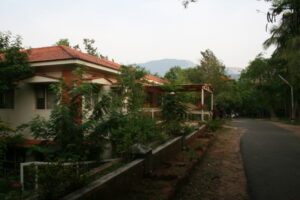 Arsha Vidya Gurukulam is an institute for the traditional study of Advaita Vedanta and Sanskrit located about 25 Kms from Coimbatore, Tamil Nadu, India, in the picturesque Nilgiri Mountains.

The word Arsha means that which belongs to the Rishis – the seers, the sages of ancient India. The word Vidya means knowledge. Gurukulam refers to a residential center for learning with the teacher. Arsha Vidya Gurukulam is a place where one learns the knowledge imparted by the Rishis.

Established in 1990 by Pujya Sri Swami Dayananda Saraswati, an eminent teacher of Vedanta and an erudite scholar in Sanskrit, the Gurukulam is patterned after the ancient gurukulams of India. The Gurukulam offers Indians and foreigners alike an opportunity to study the Upanishads, Bhagavad Gita, Brahmasutras and other related classic texts. The students are not only taught Vedanta but also Sanskrit,Yoga and Vedic Chanting

Here Vedanta is taught true to the sampradaya, the traditional way of teaching, in a setup which is as modern as it is traditional. The students come here and live with the teacher, learning as much from living in the Gurukulam as from the teaching. The students come from all over the world with interest and commitment to study. Sanskrit is taught through the classical Paninian Grammar.

The Gurukulam has been offering weekend students classes, short term retreats, long term retreats to people wanting to study Vedanta and also yoga and other retreats. However it has carved a niche for itself in offering intense three year programs in Vedanta and Sanskrit, the graduates of which are sharing this knowledge with others all over the world today.

There is a method of teaching, a method of communication, by which the vision of the whole can be imparted to the other. We have a tradition that begins with the Lord and comes down to us through the Rishis. The tradition has always been the same.

It has not undergone any change; it cannot undergo a change because it deals with the whole. This certainly does not apply to the knowledge of the parts. For example, the knowledge of physics in the Vedas is definitely wanting. But that is so because physics deals with details. Physics was not the subject of the Rishis. You can always defer about the details in the creation and that is so even now. What is considered as right at one time may not be considered so at another. And so the knowledge of the whole alone is the knowledge that can be handed down intact without the need for any amendment. Thus we have a parampara or a tradition.

Mystics do not create mystics-because they are mystics. A mystic cannot make another one equally an eloquent mystic. If he can, then there is a means of communication and therefore there is nothing mystic about it. Then there is a teacher. Mystics have no tradition whereas when teaching is involved, there is communication. There can be a tradition-a teacher, a student and his or her student; Guru-Sishya parampara. Then the flow is possible.

In this world there is nothing more sacred, more purifying than knowledge. This knowledge, Arsha Vidya is like a river that flows from the teacher to the student and to his or her student and thus it goes down. And knowledge being what it is, it is always true to the object. There cannot be a second version about knowledge. The word guru can be used for anyone who imparts us knowledge; be it the knowledge of music, dancing, language or any other subject.

To remove the ignorance of the whole is the job of the guru. The first guru is the lord, the creator. It all starts with the Lord. We know the parampara only upto the Rishis and then we simply connect it to Lord Sadasiva or to Lord Dakshinamurti. The knowledge is first revealed to the Rishis and from them it flows to us. Therefore this Vidya is called Arsha Vidya, the vision of the Rishis.

Arsha Vidya, the vision of the Rishis is a beautiful vision. It cannot be bettered by anybody. Others can say you are a part of the total, you are little, you are mortal, etc. But the Rishis say that you are the whole. They have the last word about you and they say that you are the last word in the creation! And so this vision Arsha Vidya can never be bettered. It is also not available for any kind of an opinion and so it cannot be falsified. The whole is not subject to time etc. and hence it does not come under any kind of contention. And that is why it can be handed down by a teacher to a student in its entirety. This is the only knowledge which qualifies to be called knowledge because it cannot be falsified, it cannot be improved upon, it cannot be amended. It is the knowledge which is the very basis of the sanatana dharma and everyone must acquire this knowledge because there is no better choice than recognizing the truth of myself, the world is isvara, the whole.