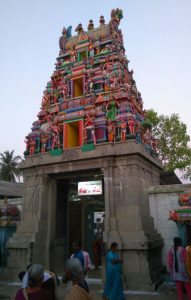 The term Thevaaram is used to denote the devotional poems sung by the three Saiva saints – Appar, Sambandar, and Sundarar who lived in the 7th and 8th centuries CE. There are nearly 8000 Thevaarams. These hymns, together with the ones composed by 23 other Saiva saints, have been compiled into 12 volumes known as “Panniru Thirumurai.” They constitute the canonical books of Saiva Siddhantam and they are also an essential element of ancient Tamil literature. During Raja Raja Cholan’s rule in the 11th century, Thevaarams and other Thirumurais were sung in the Saiva Temples. With the loss of the royal patronage, there has been a slow decline of this extraordinary tradition with the result that many ancient temples are without the services of qualified oduvars. With a view to stop the downward slide of the ancient Saiva tradition and to revive it to its original glory, Swamiji launched an Oduvar (singer of the Thevaarams) Support Program in 2005. 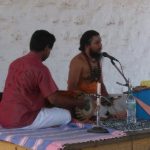 The program consists of appointing oduvars in the Saiva Temples, conducting annual festivals known as Thirumurai Thiruvizha, and honoring senior oduvars who have dedicated their lives to preserve the ancient tradition. Swamiji has honored so far 10 senior most oduvars by conferring upon them the title “Thirumurai Sevamani” and presenting each a cash reward of Rupees 20,000. This recognition of the senior oduvars will become a regular feature in the future Thiruvizhas. At present, the Oduvar Project is supporting 21 oduvars who are serving in different temples in Tamilnadu.

As more qualified oduvars are discovered, they will be appointed in in all those temples which have the services of oduvars. The goal is to have one oduvar in every ancient temple visited by one or more of the composer saints.