Special abhisheka and puja was performed to Lord Dakshinamurthy Temple on Guru peyarchi at AVG on August 2, 2016. Over 500 devotees took part in the puja. Traditional puja with shodasha upacara was performed. 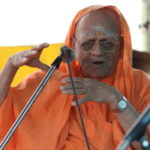 Swami Sudheerananda of Coimbatore spoke on the importance of worship on the Guru Peyarchi day. Swamiji said that the day was auspicious as during this year, not only Guru Peyarchi, but also Adi Amavasa and Adi Peruku occurred on this day. On this day Jupiter from simha rashi enters kani rashi. Worshipping Lord Dakshinamurthy as planet Guru on this day helps to reduce our papa and also earn punya. 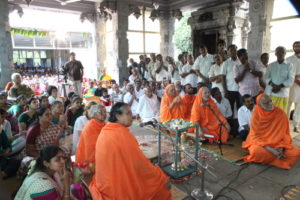 The recorded talk of Pujya Swami Dayananda Saraswati from 2010 Guru Peyarchi was played. Pujya Swamiji spoke about the significance of Guru Peyarchi in the predictive discipline, astrology. He explained that Guru (the planet Jupiter) takes one year to transition from one rashi to another. Guru being the most benign graha in the predictive discipline, it blesses the people born in the rashi with a good turn of events and significant changes. Through the position of the planets, one’s karma can be predicted because everything is connected in this creation through the various orders of Isvara. Also, Swamiji mentioned that Guru takes 12 years to complete its orbit around the sun. Similarly any discipline of knowledge takes 12 years to gain a good hold. For Vedanta study, minimum 12 years’ study is required. We pray to Planet Guru (Jupiter) represented by Lord Dakshinamurthy for spiritual and material growth on this day. This Guru Peyarchi is favourable for Vedantic and Sanskrit studies.

The puja concluded with maha aarati followed by maha prasada. 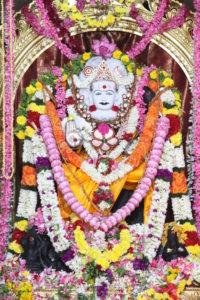