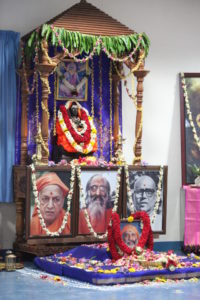 Guru Purnima is the birthday of Vyasascharya, whose invaluable contribution to the world as the compiler of the Vedas, the Mahabharata and the 18 Puraanas and most importantly to Vedanta through the Brahma Sutras. We worship on this day, the Guru Parmpara starting from Lord Dakshinamurthy, Vyasacharya, Adi Sankaracharya, Pujya Swamiji and our Acharyas. Just as we invoke Lord Dakshinamurthy in the temple, we invoke all our Acharyas as the altar of worship on this day. We worship the institution of Guru on this day.

ANUGRAHA BHASHANAM: Swami Sadatmananda delivered the anugraha bhashanam. He elucidated the great contribution of Vyasacharya to the tradition. Gurupurnima also indicates the beginning of ChaturmAsya when Sannyasins stay at a given place and teach for the next 4 months. He extolled the observance of austerities during these 4 months. He suggested that all spiritual seekers should take a vow to follow a new spiritual practice like japa or to give up something for 4 months from this date. If 4 months is too long, it can be observed for 2 months or atleast the last 1 month. Spiritual practice during this period are considered very efficacious. What we follow for 2 months will later become our habit.

PUJYA SWAMIJI’S VIDEO TALK: Pujya Swamiji told that adhikaritvam is the main requisite for Vedanta study. In case there is a defect in the eyes, the object of sight cannot be correctly seen. Similarly if a person is having some inadequacy in adhikaritvam, he cannot appreciate the Vedantic teaching fully. In Vedanta, Adhikaritvam is talked about as Preparedness. The quality of a person having certain attitudes or values are recommended rather than as some necessary attributes of the mind.

PUJA TO GURUKULAM ACHARYAS: In the afternoon, the students organized a programme to express their gratitude to all the Acaryas of the long term course. Acharyas of the Gurukulam were welcomed with purna kumba into a specially decorated dias. N. Avinashilingam was the master of ceremony. Traditional pada puja was performed and all upacharas were offered by the students to all the Gurukulam Acharyas. Songs were rendered in the praise of the Guru. A few students expressed their gratitude on behalf of all the students for the teaching, grace and affection of the Acharyas.

The students presented a skit ‘Jnana PravahaH’, imagining Vyasacharya and Shankaracharya visiting the Gurukulam to appreciating the adherence to the teaching tradition.

All the Acaryas blessed the students with their anugraha bhashanam. The programme concluded with the vote of thanks.

All the students offered Guru Dakshina to the Acharyas and received their blessings. 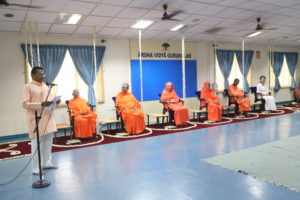