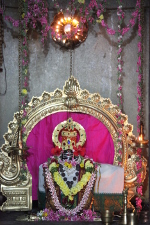 Maha Sivaratri Puja was observed in a time-honored and solemn manner on March 7, 2016.

AKHANDA NAMA JAPA: There was akhanda nama  japa of the pancaksari mantra ‘Om Namah Sivaya’ from 7 AM to 3 PM. Swami Atmatriptananda from Kolkata led the chant.  All the Swamis, Swaminis and students at AVG, Anaikatti took turns and chanted the mantra continuously. Many musical instruments accompanied the chanting. The atmosphere was filled with divinity and the mantra continued to echo in minds of the participants for many more days even after Sivaratri.

EKADASA RUDRA ABHISEKA:  The chanting of Sri Rudram commenced at 4 pm, and during each of the 11 chants, 11 different dravya abhiseka was performed to Lord Medha Daksinamurthy and Lord Narmadesvara.

MAHA ARATI: The Maha Arati took place at around 8 PM.

RATRI PUJA: During the night, three kala pujas were performed for Lord Narmadesvara.  Led by Swami Atmatriptananda, many participated in the bhajans in the temple all night. There was divine ecstasy and the atmosphere was charged with devotion to the Lord.

The Swamis, Swaminis and Students observed fast and kept vigil for the whole night and spent the day in a memorable manner.