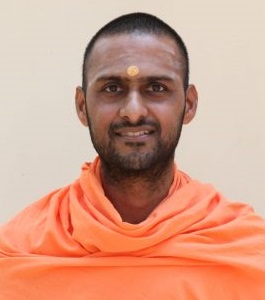 Swami Viswatmananda Saraswati is a disciple of Swami Dayananda Saraswati. Started his spiritual journey at a very young age, he met Pujya Swamiji’s senior disciple Swami Sadananda Saraswati in 2002 at Kerala and learned Upanishads, Gita, and many other Vedantic texts from 2002 to 2006. He lived in Haridwar for more than a year learning shastram and sanskrit. In 2008, he joined Gurukulam in Anaikatti, and was doing seva and learning shastras from Pujya Swamiji in Anaikatti and Rishikesh. He underwent a 3 year course between 2010 to 2013 conducted by Pujya Swamiji, and he took Sanyasa Diksha from Pujya Swamiji in the year 2014. He continued his seva till 2015 and assisted in teaching sanskrit for the long term course students. Currently, he is assisting in teaching sanskrit at the Gurukulam.