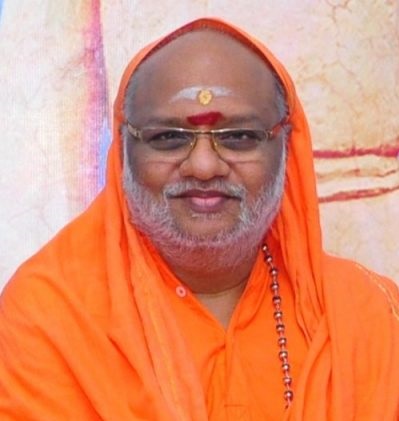 Swami Jagadatmananda Saraswati born in 1961 is the ardent devotee of Pujya Sri Swami Dayananda Saraswati since 1999 and he was ordained into Sannyasa under Asrha Vidya Parampara by Swami Sakshatkrtananda Saraswatiji in 2017. He studied Sanskrit and Vedanta from Swami Paravidyananda Saraswatiji, disciple of Pujya Swamiji. Earlier he was initiated into Saiva Siddhanta Sannyasa in the year 2000 by H.H. Santalinga Ramaswami Adigalar of Perur Math, Coimbatore. Swamiji in his purvashrama was a Sri Vidya Upasaka and he was initiated into Sri Vidya and studied Jyotisha Shastra in the year 1991 under H.H. Balasubramanya Gurukkal of Perur. Swamiji’s selfless service in the field of Vedic Astrology and Prashna Jyotisha had been appreciated by Pujya Swamiji. Swamiji is the Founder Trustee of Shri Lalitambika Trust since 1997 and he built Shri Lalitambika temple in the year 2000 and the same was consecrated by Pujya Swamiji. Swamiji is the Director of Shri Lalitambika Jyotisha Gurukula and the same was inaugurated by Pujya Swamiji in the year 2012. Swamiji is the Founder of “Dayalaya” – a memorial of Pujya Swamiji and the same was inaugurated by Swami Sadatmananda Saraswatiji and Swami Shankarananda Saraswatiji in 2017. Swamiji has M.A. M.Phil and Ph.D. degrees in Philosophy awarded by Madurai Kamaraj University, Madurai and his research topic was Philosophy of Value Education. He has written 5 books on Astrology in Tamil and has developed a course material on Vedic Astrology in English and Tamil based on Parashara Hora Shastra. Swamiji also served as an Honorary Dean and Professor in the Division of Yoga and Spirituality at SVyasa University, Bengaluru. He is dedicated to teaching Vedanta in Tamil. He conducts regularly monthly Satsangas in Tamil on the topics of public talks given by Pujya Swamiji. Presently Swamiji is the Gurukulam Chief Advisor and a teacher of Vedanta at Arsha Vidya Gurukulam, Anaikatti, Coimbatore.